It started off as any other hard week of playing Fight Man and dishing out burgers at Meaty Boy, but little did our two heroes know it would soon turn into one of the sickest adventures ever. Friday evening Eagle Lord and Dangerous Person headed out to the land of Joe Six Pack to stage their attack. After conferring with Mason, the best computer hacker they know, they decide that due to the potentially unstable snow in Hatchers they should head up to Hunter Creek to go exploring. After Climbing around The Cliffs of Insanity, the frigid waters teeming with shrieking eels and fighting off ice block head monsters with their mad ninja skills, the two trepid explorers happen upon some vertical ice. Unfortunately they sprung their trap too early and as they were at the top of the climb they found that just around the corner from where they were there was some truy wicked ice. 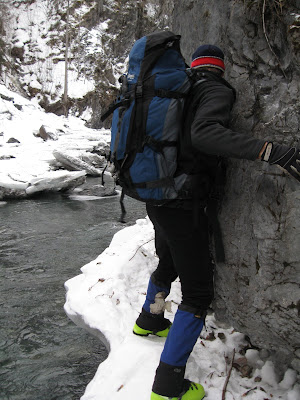 Scaling The Cliffs of Insanity 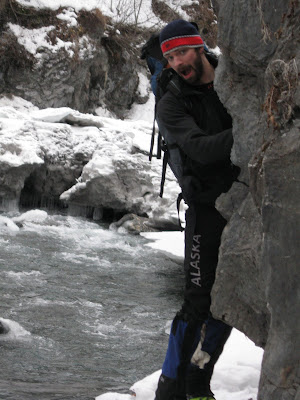 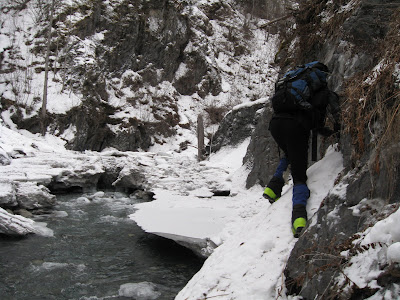 The Cliffs of Insanity with frigid shrieking eel waters below 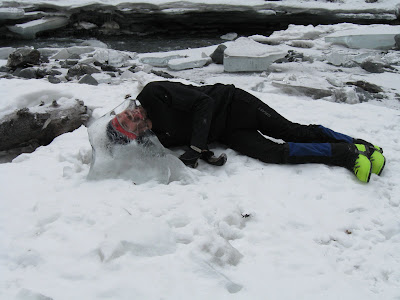 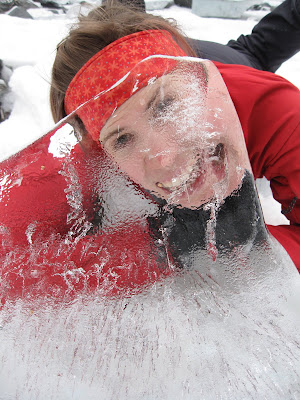 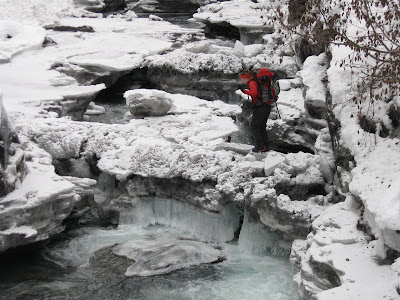 The ice bridge of terror
The next day Eagle Lord and Dangerous Person headed out to the Hillside Pillars of Doom. Early on their trek to the HPoD they found that there were fresh tracks in their path. Surprised, the two Fight Man champs thought it was their evil nemesis, Eric. He'd better watch out, that fool, yeah fool...... foolish sucka! But as it turned out it was Ice Elf Queen and her friend Tony. It was too funny because Ice Elf Queen, Tony, Dangerous Person and Eagle Lord seemed to know so many of the same people, it was a suprise that they didn't know each other previously. After a wonderful day the four of them vowed to meet again to vanquish Eric, the foolish sucka. 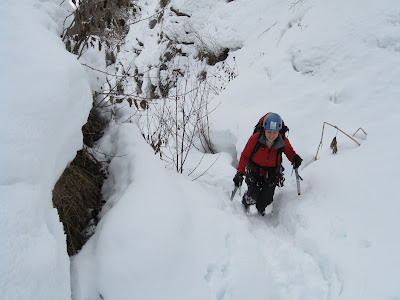 Dangerous Person trekking up to the Hillside Pillars of Doom 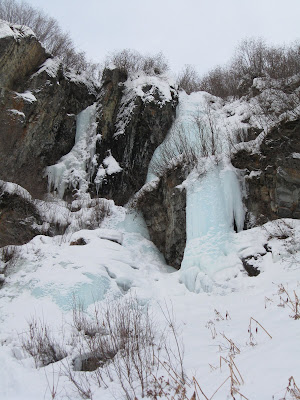 The Hillside Pillars of Doom 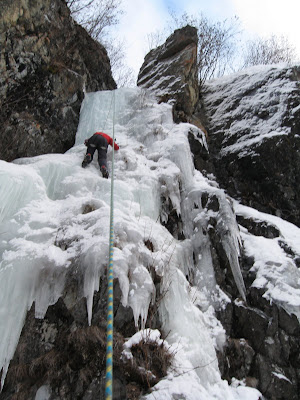 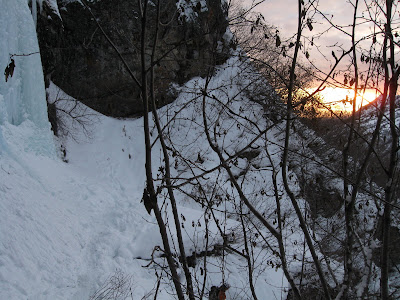 Off into the sunset, to vanquish Eric! 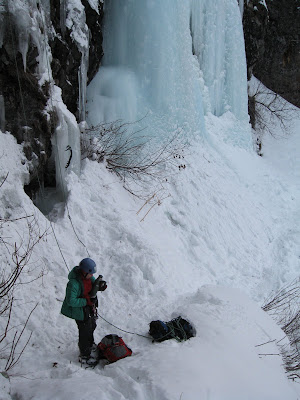 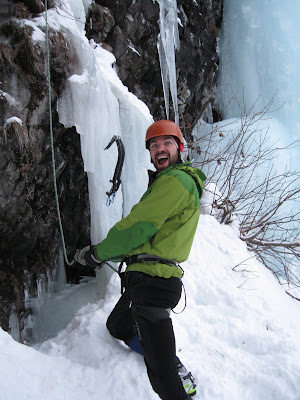 Eagle Lord strapped into the pointy end of the rope 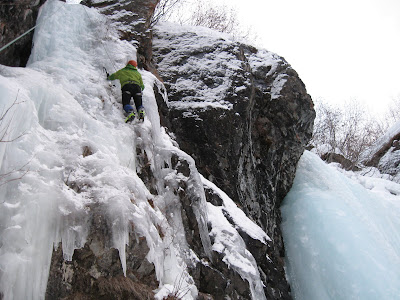 Eagle Lord on the HPoD
The next day Dangerous Person and Eagle Lord went into the mountains to train for their impending fight with Eric. It was coming up quick; they only had a day left to train. While on the mountaintop they practiced their Flying Death Kick of Death. 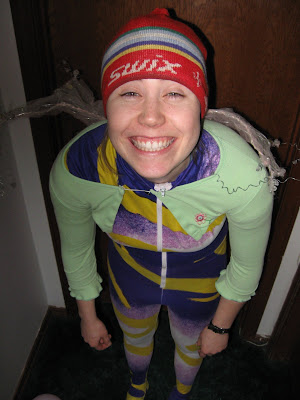 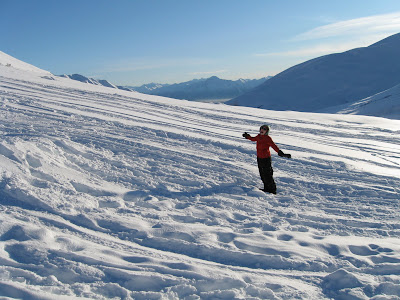 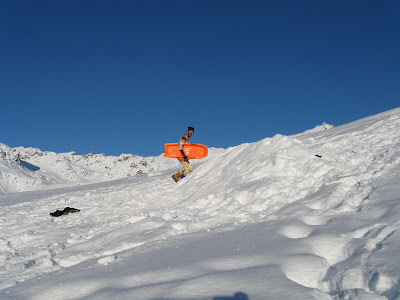 OMG!! Is that Sasquatch.....or Sassafras 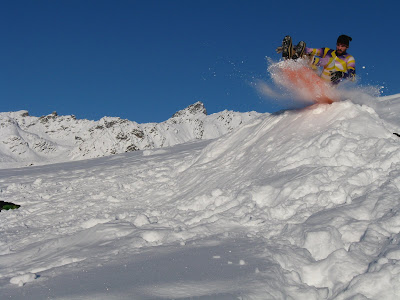 Eagle Lord into the Flying Death Kick of Death 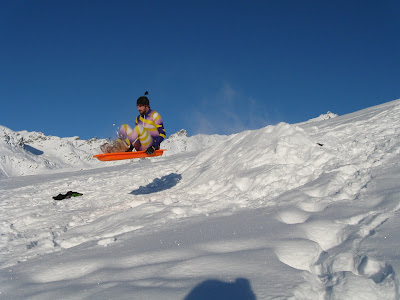 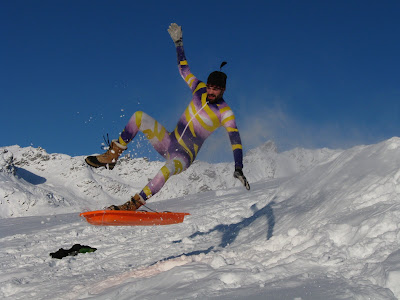 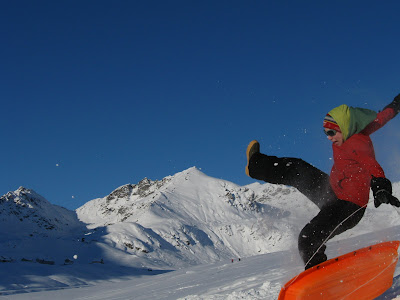 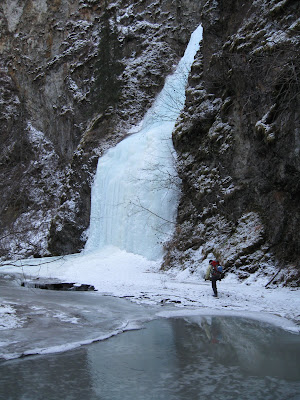 Dangerous Person approaching Ripple, without Eric!
To be continued.....
Posted by Pablo at 10:35 PM

We wait with bated breath (or bait breath?) and bruised thighs for the excited sequel, O Eagle Lord!

I almost came as an eagle actually, then I realized that a shark is slightly better.