This time it is for fun

This time I've taken a different focus, fun. I've been racing in the AMH Anchorage Cup Races. Last weekend I raced in Pia's Classic and this weekend I did the Hickok Pursuit. Pia's is a 30k mass start classic race and The Hickok is a 10k race where you race 5k classic and 5k skate. It was so much fun to get out there and mix it up with other skiers.

I found it was so much nicer to just go and not worry about anything. My last few seasons I ended up putting so much pressure on myself ski racing wasn't fun for me anymore. I would always say that I had fun, but in reality I really wasn't having fun. I was beating myself up mentally; I couldn't keep a positive out look on my racing or how I was feeling. I would usually finish a race second guessing my effort and wondering if I had gone hard enough. On my cool down I would systematically pick through my race and try to figure out what I could have done better. Not matter what I did, or where I placed I was never good enough in my own mind. I could never go hard enough, ski as technically well as I wanted or place where I could make my goals.

Last Sunday, when I finished my race I actually felt like I had fun. In three years I can remember two races where I finished and felt like that; the 2006 Tour of Anchorage and the 2007 New Mexico Invite. After my last ski race last year I didn't think that I would be out ski racing in the next couple years. I had finally beat myself far enough down that I couldn't stand it anymore. But after my trip to Guatemala, and getting some separation from the world of nordic ski racing, I had an epiphany. It didn't matter anymore where I placed, or how I did. I found that I like the feeling of racing, the blood pumping through my body and being in the zone.

So when I got back from Guatemala I started to ski again. This time for fun. There is a great local group of skiers where that is their goal. Some of them are more serious than others and want to show that you can still race competitively while maintaining a 40 hour work week. I'm done with that. Been there, done that. Count me in the fun group. My training plan is as follows. Stay active. When fun, adventurous activities don't present themselves, go out and ski. This has worked great so far. Between fun, adventurous activities and resting from those activities I usually get one or two days of skiing in a week. One of those sessions is usually intervals with the local group. Okay, so I still haven't completely broken myself from training completely (setting goals and doing intervals). It is a hard habit to break. At least this time it is healthy. I feel like I've got a healthy balance now.

Pia's classic was really fun. It was a blast to get out there and mix it up a little bit. But when it came down to it, it was really nice not to suffer and just ski. My goals were to ski with good technique and not worry about where I came in. Mission accomplished. I was able to get out there and mix it up with Adam and Rob for a while, but when it came to the punch I didn't feel that I had to puke my guts out to stay with them. I got what I wanted out of it; to ski in the zone for 30k and to feel my heart pump blood through my body.

Today I finished the Hickok. I'm not sure where I came in, perhaps top 15. Again it was really fun to get out there and do some ski racing. It was my first ski of the week. I've been staying fairly active though doing back country skiing, breaking trail up hill for a ways. I could definitely feel that I haven't been training like I used to in this shorter race. The whole race I felt like I was shaking off cob webs. But this time when I came to the last kilometer I did feel like pushing it a bit. I had really fast skis and was pulling away from the group I had been skiing with and gaining on the couple guys in front of me. With about 1k left to go I had just about caught up to Adam and gave it everything I had to catch up to him and get away before the final sprint, as Adam can easily out sprint me.

Its been nice to take this different approach to racing. I feel like if I really want to get back into it I can just start putting in the time and get it done. I know what it takes now, and for now I don't want to do that any more. I'm perfectly happy finishing off the tail end of the fast guys and having a ton more fun than they are. Well time to get a few chores done around the house before going out tele skiing tomorrow. :) 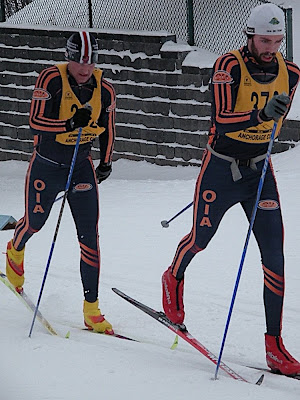 Rob skiing behind me on the first lap of Pias
Posted by Pablo at 3:33 PM

Oh, I am so happy for you. My heart is just so full. Now if I can learn to 'like the feeling of the blood pumping through my body and being in the zone.' I've learned to love my hikes and yearn to get out. Maybe by spring/summer they'll be 'runs.'
Mom

Heck yeah! Sounds like you've got it figured out! It was super good to be on the course with you again, this time on your own terms.