Without a computer it has been really hard to get the blog updated. So now that I've got some down time and access to a computer here are a few updates. (Vista doesn’t' seem to work very well with Blogger; so the spacing on the captions is a little weird for these posts.)


Last Thursday I had the day off so I figured I would head out to Hatchers for my first cross country ski of the season. The conditions out there were perfect! Ed had just finished grooming, it was extra blue conditions and I had the place to myself.

After skiing around for an hour and a half I noticed that there was another red swix drinking belt. There had been one other person up there while I was skiing, and they didn't look like the type that would have had a drinking belt. There aren't too many kilometers of trails right now at Hatchers and I was stumped on who else could be up there that I wasn't running into that would have a red swix drinking belt. I decided to go in for a closer investigation. To my great sunrise it was Karl's drinking belt. Apparently he had forgot it up there after his ski the previous Saturday. Thankfully I was able to get to it before someone stole it.

That evening Cassi and I heard that the ice was coming in at Eklutna. So that Friday we headed out in that direction for some ice climbing. We weren't sure what the river situation was so we decided to hike up the Thunderbird Falls trail rather than up the creek. The first climb in Eklutna is Mad Dog. Upon seeing that it was somewhat in and that we could repel into from the trail we decided to go for it.

We couldn't see from the top that there wasn't much ice on the bottom half of the climb. It looked like it might be over my head with the first half of the climb being mixed. Karl was nice enough to let me borrow his ice gear which was really nice because it was nice and sharp so I didn't have to hack away at the little bit of ice that was clinging to the rock. It ended up being a lot easier than I thought it was. It was really fun to tap the tools in on little placements than to hack away at a wall of ice. 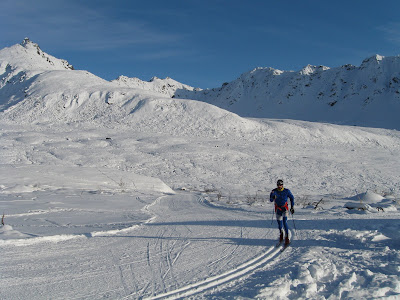 You have no idea how long it took to get his shot of myself. This one wasn't so hard. 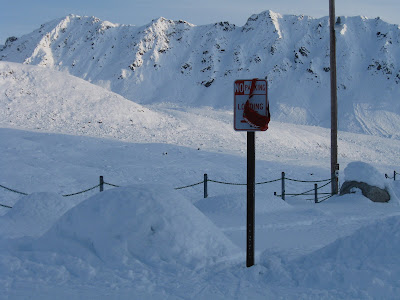 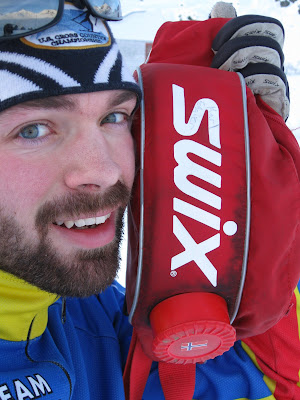 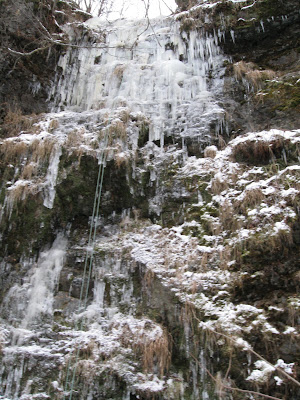 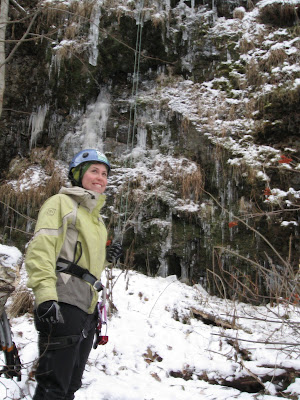