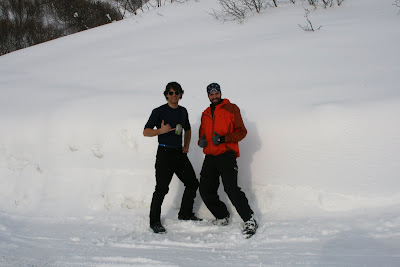 WOW!! Life IS good! Only in Alaska, especially Anchorage. Today was one of those days where you are just jazzed on life, and you can't possibly see how anyone could have any more fun.

This evening Karl and I busted out to Peak 3 for some freshies after school. April has been really good this year; we have been getting dumped on. Today we got a good eight inches of snow in town. I just had to get out after my test this afternoon. Karl and I left the car at 7:15 (PM mind you, OIA) and and started skinning up Peak 3. There was at least a foot and a half of new snow up there! Thankfully someone had already busted out a skin track up the mountain. On the down side this guy wasn't the smartest peanut in the turd. His skin track was straight up, not very forgiving for those with bad skins. On top of that he was out by himself on a day with A LOT of fresh snow. I watched him ski a stupid line through some rocks, setting off a small avalanche (or a large sluff, however you want to look at it). After watching that Karl and I decided to stop where we were and ski down the more gentle portion of the slope. After consulting with Lars and Kristina (who we ran into out there) we decided to ski the skier's right side of the bowl, which is less prone to sliding. WOW! It was pretty epic skiing. The snow was waist deep (granted we were tele skiing and we were squatting down a little). Lars was saying it was the most snow he had ever skied on Peak 3. Sadly the batteries ran out on my camera ran out at the top and I couldn't get pictures of Karl skiing down. But I'm planning on heading out tomorrow morning and getting a few runs in before class at 1. 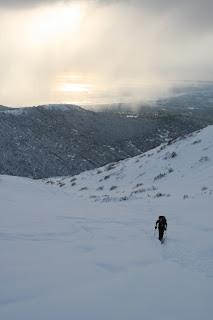 Karl skinning up just as the light was getting sweet. 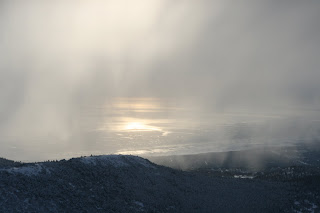 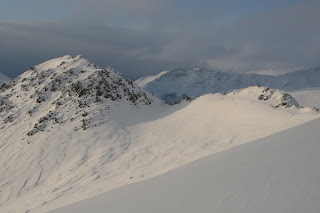 The view from where we started down. Shortly after I took this picture an eagle flew over head. It was really cool!! Too bad my battery died (those darn dramatic batteries always dieing on us). 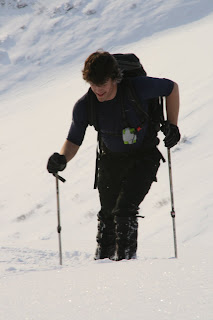 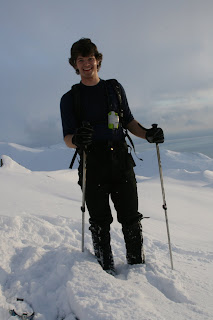 Made it up. Hurry for the white stuff. 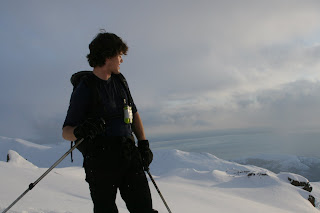