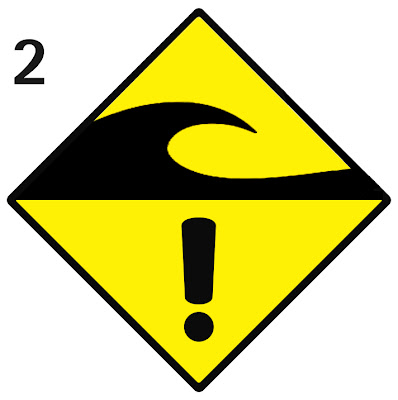 This is Paul Schauer with the Glacial Facial Crew on Sunday, April 29th. This will serve as a general whitewater advisory issued for Six Mile Creek, this advisory applies to all three canyons of Six Mile Creek.

ANNOUNCEMENTS
This will be the first and only advisory for the 2012 summer season on Six Mile Creek- 6 months of AMAZING paddling has already begun! Susitna Sled and Kayak will be hosting the second annual Willow Creek Whitewater Festival on May 26 and 27. Check out their website for more details.


BOTTOM LINE
There is a MODERATE danger in all three canyons of Six Mile due to snow bridges, snowy banks, and eddies filled with snow. Warmer temperatures and or rain should keep these concerns mostly at bay. Keep a close eye on constrictions as these have a higher chance to catch wood as the water begins to rise. In the case we have a rapid increase in the water level, there will be a CONSIDERABLE danger for strainers until it is determined if and where new wood has lodged.

RIVER DISCUSSION
Trip Kinney, Matt Peters, and Brian Graham and I made the first trip down Six Mile yesterday (4/28/12). The four of us ran first and second canyons and Trip, Matt, and I continued down third canyon. Little snow bridge activity was seen on the river yesterday. The only complete snow bridge was just below Waterfall in the first canyon. It was easily portageable on river left just upstream of the snow bridge (at 9.5’, ~750 cfs). There was one other small snow bridge blocking the sneak at Suck Hole. The boot track is set at the second and third canyon take outs, get out there and enjoy the river!

Primary Concern – New Strainers
Strainers are our primary concern until the commercial rafting season gets going. Although we did not have any issues with wood yesterday, a small rise or drop in water level could change things. After running The Nozzle small branches were seen sticking up from under the water at the bottom of the rapid. If the river drops, be sure to scout The Nozzle. There were a lot of new dead trees lining the banks just waiting to head downstream and lodge themselves in the river. Be extra cautious as the river continues to rise and keep your eyes out for new wood. If you see anything please be sure to add your observations to the comments section below.

Secondary Concern – Snow
The secondary concern on the river in the early season is snow. There is snow lining the banks most of the way down the river. In some places it is just a sloping snow bank, but in others it is overhung, making it impossible to get out of the river at some points. Swims on the river right now could be very long and very cold. STAY IN YOUR BOAT. In some cases there is snow filling eddies you may normally catch, and your traditional stopping points my not exist until the river thaws out completely. In the next week or so (if we have nice sunny weather) the risk due to snow bridges will likely decrease. There was only one complete snow bridge across the river, just below Waterfall and it was easily avoided on river left (at 9.5’, ~750 cfs). There was one more small snow bridge blocking the sneak at Suck Hole. As of our run yesterday you had to run Suck Hole.

Other Observations
It is also worth noting that Merry-Go-Round has changed. There is no more giant boulder at Merry-Go-Round. Where there once was a giant boulder there is now a massive hole. The late season high water events last year have probably rolled the boulder. That being said, the line is still the same; drive hard left and ride the top of the curling wave off the wall and avoid a big wave/hole at the bottom left.

This concludes the first, and only, advisory of the season for Six Mile. If you see anything new on the river please submit your observations in the comments section. As the river rises be sure to check the comments section for where there might be new wood. The season is just beginning, as I make it out to other rivers this summer I may add additional advisories if there is anything new of note (wood, giant snow bridges, lost paddles, etc) in the rivers. Thanks and have a great summer!

Got out for another run on Six Mile this evening. Great levels and good times. Ran Second and Third Canyons. The Boston Bar seal launch is awesome! Get at it while it is still good to go. Wood is moving around. There is wood in the first step on Staircase. There is a diagonal log caught in the pinch (high section on river right of the pinch). Be sure to be on river left of the pinch with a good boof stroke, and DO NOT run it upside down. No more ice bridges in Third Canyon.