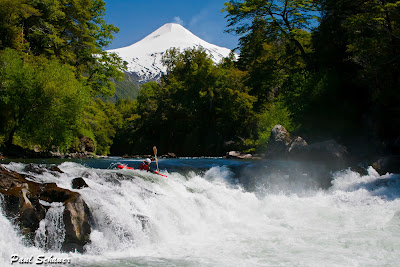 I've been back just over a month and I'm finally getting around to posting about Chile. I guess it has taken me a month to process everything from my first international kayaking trip.

Chile was a very humbling experience.

Alaska's paddling community, though tight knit, it is very small. There is not a high percentage of boaters that are ready to fire it up. That's not to say that there aren't any, as there is a very enthusiastic group, but nothing like the numbers around the current kayaking mecca. My first day in Chile I signed up for a race down IV+/V- right behind Bomb Flow front man, Evan Garcia. After tail lighting the Upper Palguin, I hiked back up to the top to "race" my way down with a bunch of professional kayakers. Race is in quotes because I wasn't really in the mind set after traveling for two days and having not been on moving water for nearly two months. On top of that I more epically failed rather than race; flipping twice in the middle of the first drop, going over the first waterfall upside down, then missing my boof on the second drop and providing the carnage and swim all the spectators were waiting for.

I spent my first few weeks at the Pucon Kayak Hostel with the New River Academy/Huge Experiences kids and instructors. It was the first time I had really been around people that paddled 300 days per year. I would be lucky to get 100 days a year. It a different experience to be the wide eyed questioning newb. We didn't get too much of an opportunity to scout many of the drops that we got to run. The people we were paddling with were incredibly comfortable with the water and the runs. More often than not we would get a quick run down of the line in an eddy then chase everyone through the rapid hoping you had your rights and lefts correct. Having primarily paddled in Alaska, I was pretty knew to being on completely foreign rivers with a group of people that new the run well. Typically back home, if I didn't know the run, there would maybe be one other person in the groupe that knew it.

Not only was I surrounded by some of the best kayakers, the rapids people were running were beyond anything I had ever seen. Not only were the styles of drops different, but what people were willing to run was totally different. There were things that I would look at and think,"People actually run that!?". Yeah sure, you're likely to break your boat, paddle, and helmet, but yeah you can run it. There is rumor that one person ran it clean. Some of the things people were running down there would make The Girdle look like child's play.

The vertical realm of kayaking was a pretty new thing for me too. There aren't too many waterfalls that are easily accessible, and all of the ones that I've come across so far, you really want to make sure you nail your boof. I was amazed watching the best kayakers change the pitch and roll of their kayak mid air. I knew (or thought I did) how to boof, but stomping and plugging were pretty new to me. To say the least, I had a lot to learn.

All in all it was a great experience. I not only got to push my comfort level kayaking, but also culturally. It was nice to know a little more spanish than my last Latin American foray, but I still have a long ways to go.

We didn't get to paddle some of the rivers that we originally wanted to or get to spend as much time as we would have wanted at other rivers. I feel like I know the ropes now, and am eager to go back soon.

The whole trip was more overwhelming and incredible than I could ever blog about so enjoy some Chile Stew. One month of traveling and kayaking in Chile boiled into four minutes.


Photos from Chile are here. 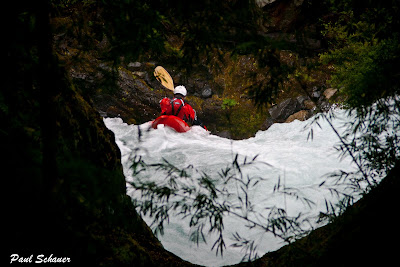