Little did I know that after skiing the S Couloir I would be doing more of the same the next day.

The evening after skiing the S Couloir I headed up with some friends to a party at the base of Ram Valley in Eagle River. After hanging out at the bonfire for most of the night, we woke up, cleaned up the mess, and headed over the ridge to Ram Valley. Once we made it up into the valley there were all sorts of lines to ski all over the place. A little tired and worn out, I was wondering what we were going to ski. I was thinking we would ski some mellow line in the sun on the south side of the valley since we had a group of six people tired from the party. Nope. Turned out we were heading for the proudest line you could see once you entered the valley, a corkscrewing couloir on the north side of the mountain.

Once we got to the base, half the crew turned around and headed back. Graham, Neil and I continued on. I was nervous; I had only done something like this one other time, and that was the day before. I liked skiing the S Couloir it and wanted to do more skiing like that. I felt that I was with a good group and that if at any point I was too nervous I could stop and ski from there.

No one in the group had been up that route so we started boot packing and trying to figure it out on the fly. We ended up putting our skis on before topping out because the couloir pinched to shoulder width appart and the snow was getting icy. Needless to say, there wasn't going to be much skiing (if at all) above where we stopped, and we were ill equipped for what lay ahead. We were equipped for the ride out. The skiing was a bit chossier than in the S Couloir, but there were still some good patches of powder to be had.

The Corkscrew Couloir that we skied last Sunday was probably the hardest ski that I've done, but I loved it and want to do more of that type of skiing. It combines everything I like about climbing, the places you go and the sights you see, with the fun of skiing. I'm finally getting enough experience to find the same adventures in the winter as I can in the summer when kayaking. I've got a long ways to go, but bring it on. 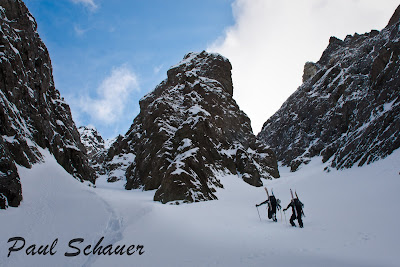 Neil and Graham booting up the left couloir 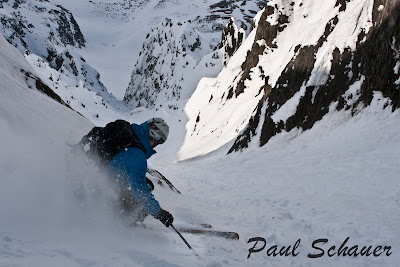 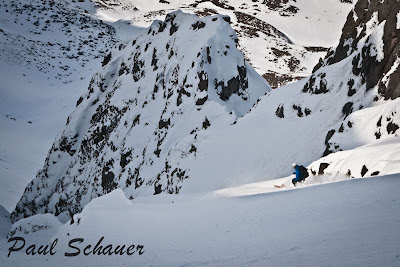 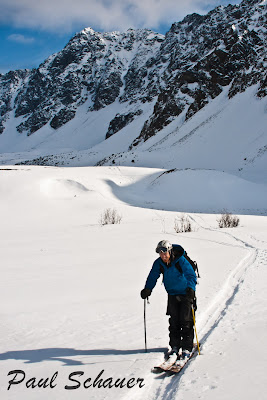 Graham heading out with the line we skied in the background 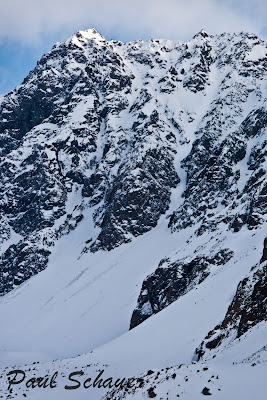 The line we skied in Ram Valley
Posted by Pablo at 12:09 AM