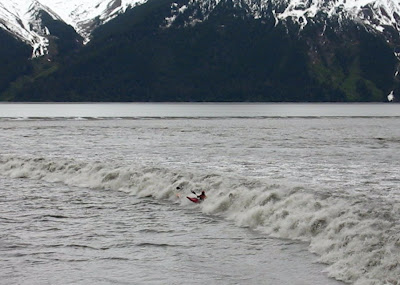 WOW!!! I survived the bore tide at the largest tidal difference of the year. I'm not just saying that; half my ride I was trying to figure out how to get out. Here's the full story.

I got back into Anchorage last week and check my email. I had tons of emails to go through, but one stuck out in particular. Chad had sent out an email about surfing the board tide the next week. It sounded like a plan; it was something I had always wanted to go do, and it seemed like a good way to take a break from writing papers and creating geologic maps and stratigraphic columns. So I fired an email back saying that I was down.

Joe, Chad, Amanda and I met up just after 5 today to car pool down to where we would catch the wave. On the way down Chad was relaying to Joe and I what his reconnaissance was from yesterday. By the sound of it the wave would form right before the second pullout past Bird Point and continue on down to the fourth pullout for a 15 minute ride. Apparently the wave would not be much of anything until this point, and it would swell up to form a massive wave. After the third pullout the wave would die down a little and pick up again right before the fourth pullout. That sounded good. I can do that. I had heard it called class five surfing before. It couldn't be too bad, how hard can surfing get?

We got down to the pull out, suited up, and got out on the water after we saw the wave go around Bird Point. The anticipation was ridiculous. First of all there were tons of people lined on the shore either waiting for someone to eat shit or to tear it up. While we were getting ready Jon, the first person to surf the bore tide in a kayak arrived and gave us a little more of a run down. Apparently the wave would form a crescent shape and funnel everyone into the middle. Jon had an eight and a half foot long surf kayak and recommended that all of us in shorter boats to line up for the maw rather than risk blowing off over the green shoulder. More and more reports were coming in that the wave was going to be really big. So waiting out where the wave was going to form was really intense. I had no idea what to expect besides a huge wave, and hopefully a a long good ride. There were five kayakers, Ben, Jon, Joe, Chad and myself and a surfer in the line up.

To say that the wave is really big, massive, or huge is the understatement of the century! It was easily a ten foot tall monster! When the wave formed it swelled up really big then started to break in the middle. It looked like it died down a little bit, but then swelled up again closer to the road. Ben took off for the far bank and I saw him catch a really nice green curling section of the wave. I saw Joe and Jon rise up on green section of the wave before Chad and I started paddling to catch our ride.

The wave hit like a freight train. One moment I was paddling for all I was worth the next I was slammed in the back and deep in the foam pile. There was a fifteen second stretch where it was really awesome getting pushed by the wave and skipping off the oncoming water. After that I decided that was enough and maybe I should try to do something with it. So I tried to carve off to one side. Nothing happened. I couldn't do anything but survive when I was in the pile, and when I was not in the pile I was skipping off the oncoming water. There were when all I could feel was the last foot or so of my boat still on the water while I rocketed down Turnagain Arm. Every time I tried to carve out to the side I would set up in the pile lean over to the side and wait for something to happen. When I would rocket out of the pile I would skip off that edge and have to lean over to the other edge to keep from doing some sort of large aerial face plant in my boat. There were a few times where I would get shoved sideways and side surf or green grind the wave for a while. At this point my thoughts were, "Oh well, it isn't too bad I'll just try to keep it pointed strait and either ride it out or wash off when I flip".

About this time I flipped over, set up and waited to get wash off the wave. The water was really violent and didn't really change. I could feel that I was still moving along with the wave in the seam. "Huh, well I guess I'm not going to wash off this time", I thought, and rolled back up still surfing the tide.

I was starting to get pretty tired at this point and started to try to figure out how to get off the wave. I also noticed that I couldn't really feel that anyone was around me anymore; that I might be the only one still left on the wave. There were a couple times in the beginning when I would get glimpses of Chad off to my right, but I didn't see anyone anymore. Anyways, I was trying to figure out how to get off the wave at this point. I would get in a side surf and surf the wave for a while trying to rest in this position. Occasionally I would get wipped around back to the front or backwards. One time when I got turned around backwards I tried to paddle up and off the wave. That didn't work; it was too steep and tall. After that didn't work I was starting to get a little worried. I remembered that people were saying that the wave died down after the third pullout, but I couldn't figure out where I was. I was either buried in the pile or looking at the sky as I was skipping along. It was about then that I saw Ben off to my right. My new goal was to try not to crash into him. There wasn't much I could do about it.

I flipped a second time and this time I tried to wait out the wave again. This time it went from extremely violent, to really violent, to violent, to not so violent, to a little turbulent, to calm. What a relief that was. I rolled up to see that Ben was swimming, but that he had all of his gear. I paddled up to him, and he was alright. We emptied out his boat across mine and made it so that he could climb in his boat out on the water. Besides Ben and I, everyone else had blown off the wave before they got back to the second pullout from where they caught the wave.

It was a very humbling experience, to say the least. The ocean has a lot of power. The only way I could describe it would be class V surfing. I believe that George, from Alaska Kayak, described it to me like that once. He hit the nail on the head. I am NOT going to surf the bore tide again at that level. I'm not going to go back anytime soon to go surf it. Only until I forget how scary it was and think that it is a good idea again; like finishing a really hard race and swearing you'll never do it again, but still end up doing the race again the next year.

Besides getting pushed up Turnagain Arm by a massive wall of water I have been ridiculously busy with school since skiing finished up. For the last couple months I have been studying for and entrance/exit exam, trying to finish my classes out strong after traveling all over, and out and about all over the state geologizing for my field class. After writing a two papers, and creating a stratigraphic section, and two geologic maps, I have one more paper to write tomorrow and I'll be done with my B.S. in Geology! Saturday I'm heading down to Sixmile for the First Annual Sixmile River Festival for some kayaking events, music and beer down on the gravel bar. Then Monday I start my internship at the United States Geological Survey in the Hydrology division. Now that life is starting to settle down I should really start training for the mountain races this year. With any luck after a few weeks of training I'll feel somewhat descent and be able to hang in with the top 15 or so.

The top picture was taken by Amanda from the second pullout. I'm the one kayaker you can see. If you look closely, off to my right is Ben taking his turn side surfing in the pile.

Here are a few pictures from the field class. 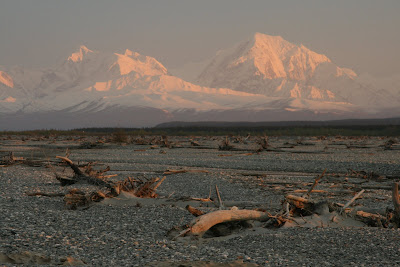 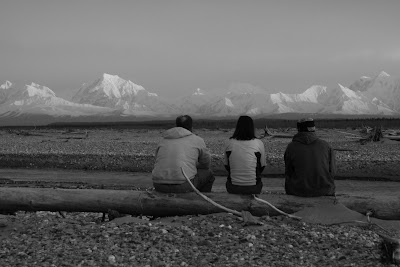 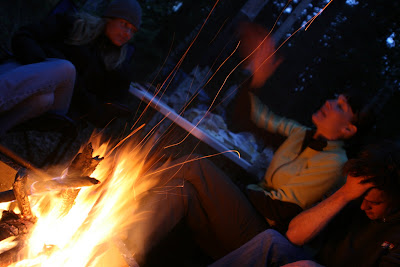 An evening around the fire. 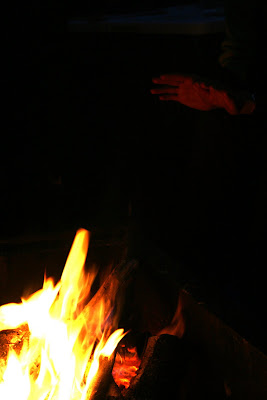 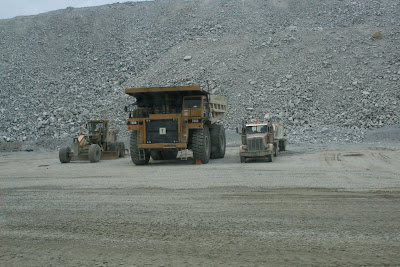 The size of the trucks they use at Fort Knox is quite impressive. There is a semi on the right for scale!

I'll see about getting more pictures up later.
Posted by Pablo at 10:40 PM

Hi Paul,
I enjoyed your page. When do you leave for India and what made you decide to go there? Please see that I get some pictures from there and a note once in a while.
Love
Gram