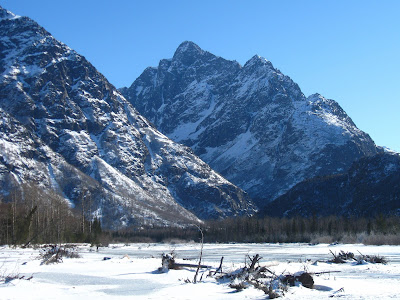 I hadn't really done any alpine climbing before this last week. I've done some ice climbing and hiked up a few mountains, but nothing like last week.

With the clear days and lack of powder, Adrian, Bryan and I decided to go climb Mount Yukla during their spring break instead of doing a ski traverse. Mount Yukla (61 11' 26.23"N, 149 6' 45.58"W) is a 7,535 foot peak in the Chugach Mountains sharing the Eagle River valley with Polar Bear and Eagle Peaks. After racing the Tour of Anchorage the three of us packed up and drove 40 minutes north of town to the Eagle River Nature Center and started hiking. It took us 8 hours to hike into the toe of the glacier below the northwest face of Yukla. It was easy going until the last quarter mile where we encountered waist deep snow. It probably took us a solid two hours to make the last half mile to camp. Our base camp was an awesome bivy under a large boulder. The space under the boulder has been flattened out after years of climbers heading up to Yukla to attempt different routes.

The next day we rested up after racing the tour and busting trail into the peak and checked out the route. The route we were planning on climbing, "Positive Side of Negative", was a little too thin. It is probably doable, but we didn't feel like we could get the three of us up in in a timely manner. The pictures and reports we had heard of was that the Positive Side of Negative was a pretty fat 1,000 foot ice ice route with the hardest pitches being WI 4. That wasn't the case last week. It looked like 1,000 feet of thin ice and mixed climbing. Doable, but a little stressful. The next couloir up the glacier looked a lot better. It was 1,000 feet of snow climbing.

The next day we rose early to pulsating northern lights from the summit of Yukla. We reached the base of the climb right as the sun rose over the horizon and started to head up. The climbing wasn't very hard. It was steep snow with some firm and some sugary spots. The toughest part was finding a decent place for anchors an pro. At best Bryan could get in one piece every rope length and a just manage to get can anchor in some sketchy looking joint set. We topped out and headed up to the peak with clear skies, no wind, and warm sunshine. From the top we could see almost all of the major peaks in the Chugach, the Kenai Mountains, the Aleutian and Alaska Ranges including Augustine, Denali and Foraker. As we descended, the light turned golden and shone right up the glacer completing an amazing day.

The next day we slept in and hiked back out the the Nature Center and headed straight to Pizza Man to cap off the trip with a schooner of beer. 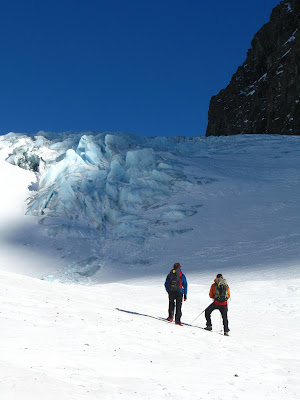 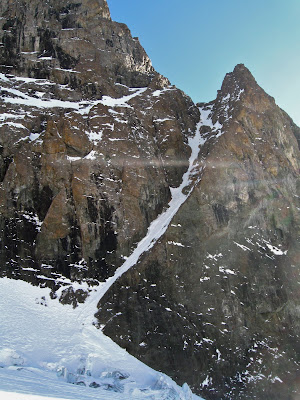 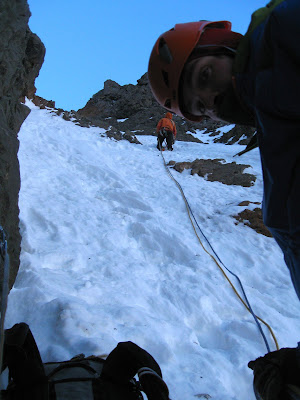 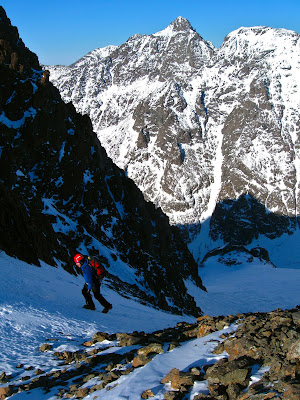 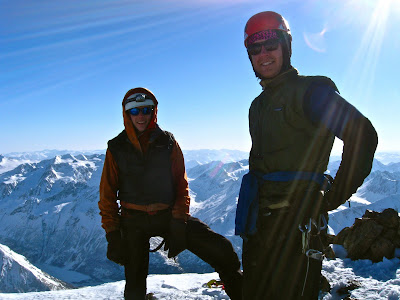 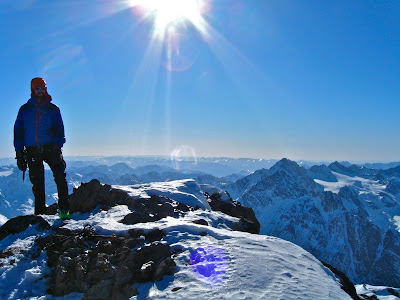 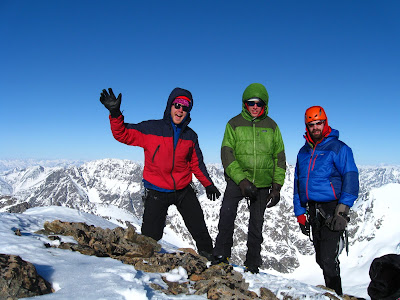 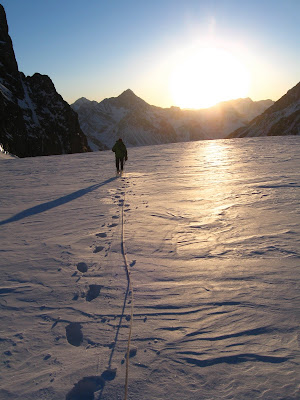 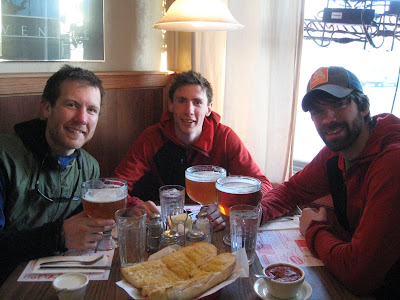 More pictures are available here.
Posted by Pablo at 12:56 PM